Call us for more information or order via phone:

Shipments only to Switzerland and Liechtenstein

I have been running regularly for about 12 years now and participate in various running competitions. So every year I complete several marathons, half marathons and other smaller competitions. In addition, I train the adults and juniors of the "Finishers Club Winterthur". 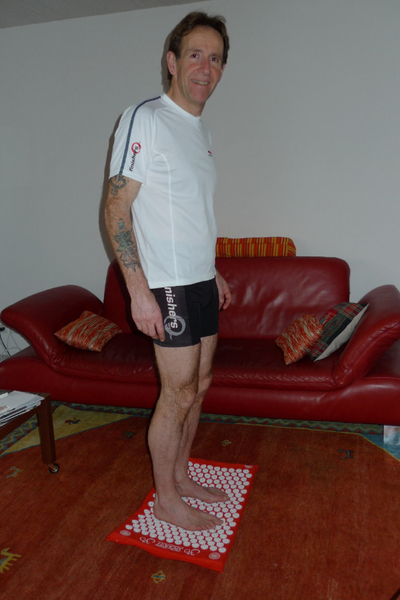 When I first lay on the Shakti acupressure mat, the many nail tips were really uncomfortable, but after a few minutes, I felt wonderfully relaxed. Since then, I use it regularly: meaning every day. I've tried many different ways to use it. What I like best is to lie with my back on the mat so that the neck is also exposed. The second daily "exercise" is to stand on it with your feet for about 10 minutes. The nail tips did not hurt me at all after a few applications, on the contrary, it is a wonderful feeling to lie on them. It happens to me regularly that, after a few minutes, I nod in and wake up again about 10 to 15 minutes later. Overall, I lie about 20 to 25 minutes on the mat and then feel really recovered. I am looking forward to this relaxing ritual every day. I have the feeling that this makes the energy in the whole body flow, similar to the acupressure massages or the acupuncture treatments, which I already had. Mostly I do the exercises in the evening, about 1 hour before going to bed. At the beginning I did not lie on the mat right after sports because I always stretched and took a shower first. In the meantime I lie down immediately after an intensive training session.

In general, I can now say after about 8 weeks of use, that the mat is ideal for daily relaxation. I do not want to give back the mat, which I have already told the distributor of the mat. Whether I have become more athletic as a result of this, or whether I regenerate faster after doing sports, I can only guess, but not say with certainty. There has not been any use for competitions until now, as I do not compete in this season. I have not felt my usual back pain during the test phase. Whether this is a result of the consistent use of the Shakti mat can only be conclusively determined after a long test phase. I can recommend the mat to all persons, healthy, as well as sick, especially athletes and those people who value a balance in life.

The day the package arrived, I immediately tried the mat. Ouch, that hurt pretty good, but as an occasional competition runner I'm used to pain! So I remained on the mat and let the spikes pierce my back. Initially, still tense about the pricking sensation, I slowly relaxed and let the pleasant tingling feeling flow through my body. When I finished my first fakir session after 10 minutes, Dani did not laugh at me anymore but laughed at my red back! 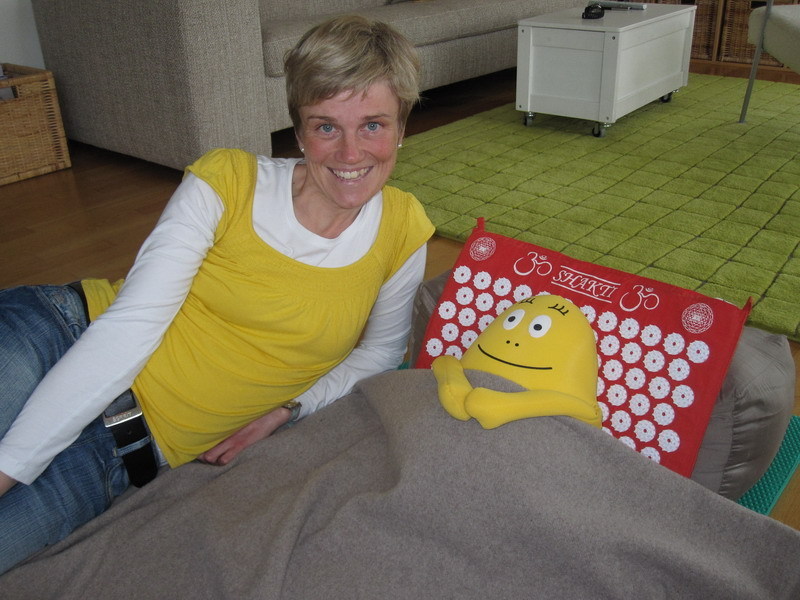 With regular use, I got used to the "good-pain" on my back and progressed to greater deeds. Sometimes I put the mat closer to the neck, sometimes under the buttocks. Because of the many races my muscles there were often strained and hardened. On the buttocks, I am much more sensitive and therefore needed weeks to get used to the spikes. But since Dani still has to put on a T-shirt after months in order to lay on the mat, the laughter is long gone and the question if I am a sissy, has also clarified. Above all, we need the mat to relax after hard workouts or to switch off after a long day at work. The mat we can recommend without hesitation, whether to athletes or non-athletes. The mat does not replace a massage. However, since you can use it yourself at any time and in almost any place, it has proven itself for us.

PS: Since I do not want to undress in front of the camera to throw myself in the usual pose, Barbakus had to stand in as a model.